Our Blogs and Links 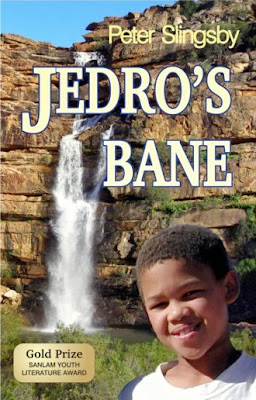 To submit your own review, scroll down to the end of the reviews for this book. Type your review in the ‘Post a Comment’ box. If you don’t see the box, click on the word ‘comments’ to open it.

Jedro’s Bane is an exceptional, surprisingly little known novel ... it skilfully interweaves the stories of three communities, separated by time ... Through Jedro and Koot’s stories, Slingsby creates a space from which some of the most marginalised SA communities can speak. The narrative is gripping throughout and should outrival the attractions of many a Playstation game.
Fiona Moolla, Cape Times

On one level, it is a thrilling adventure story ... on another level, the book broadens our understanding of our present and our past. There is depth to this story, and the kind of gentle imbedded lessons that young readers will take a great deal of pleasure in finding for themselves ... This book, I am pleased to say, was written by someone who is both a reader and a writer.
Darrel Bristow-Bovey, Commendation, Sanlam Youth Literature Awards, 2002

‘Jedro’s Bane’ ... one of the strongest and most perceptive pieces of writing about young people I have read for many a year ...
Jay Heale, Fine Music Radio

Narrated in a direct and engaging style, the tale of Koot’s rebellion immediately captivates the audience ... children (12+) will reluctantly surface from an enthralling read that also offers insight into the life of black people in South Africa a century ago, their ancient culture, and the power of storytelling.
SPECIAL MENTION Review published in “The White Ravens” list from the International Youth Library, Munich

I was engrossed from the moment I started reading ... I thought ‘The Joining’ showed that you were one of the best children’s writers in SA – and this confirms it!
Theresa Haslam, School librarian

‘Jedro’s Bane’ is not quite the historic piece about the life of the Khoi that it first appears to be. It is about the changing of the world, the passing of old customs and the fight against oppression. The characters are well-written and the narrative flows smoothly ... an exciting read.
Judith Oettle, The Herald

Slingsby deals very sensitively with the historical story-telling, for although this is a story of the Khoi’s struggle for freedom, it is clearly put that not all the colonials behaved badly against the Khoi ...
Marlene Wiggill, Die Burger
Posted by Die Kaartman at 09:27

We reserve the right to shorten reviews, and/or moderate the language used.

Die Kaartman
Journo: What's your line? Kaartman: What you mean, line? Journo: Work - whaddya do when you're not walking dogs? Kaartman: Oh, I make maps. Journo: Make any money? Kaartman: I make maps.